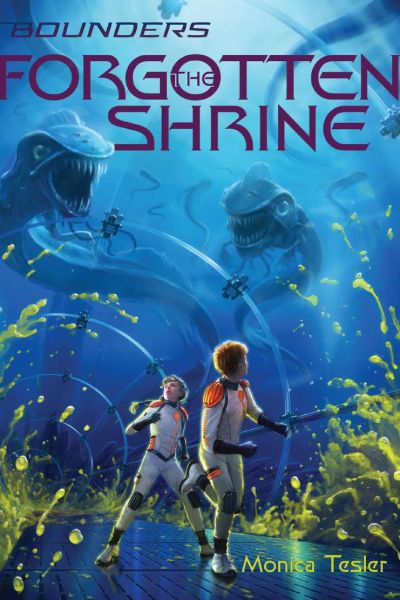 When I found out Simon and Schuster had offered to buy my debut middle grade science fiction adventure series, Bounders, in a three-book deal, I was standing in my kitchen with the afternoon sun streaming through the window. I opened an email from my agent, David Dunton, and there it was: the offer. I promptly screamed and fell to the floor, a reaction that many writers who have spent time in the query trenches and the black hole known as sub can easily understand. My children, though, could not understand. They refused to believe I’d carried on in such a dramatic fashion when I told them about it after school. So, I reenacted it for them, screams and all. Much laughter ensued.

Not long after, the reality of writing a series set in. I’m, what’s called in writing circles, a pantser, best explained by giving it’s opposite, a plotter. I start a book with a big idea, a few characters, a couple of key scenes, and a sense of the world in which the story takes place. That’s about it. One of the things I enjoy most about writing is the magic of going along for the ride with my characters. I like not knowing exactly where we’re headed, being in the dark about what lies around the next corner.

This way of writing isn’t exactly made for series writing. The kinds of series I write require macro and micro plotlines and multi-dimensional character arcs and lots of detailed world building. They require clues planted early on in the story that later reveal themselves as key elements multiple books down the road. They require the resolution of all the questions you’ve raised during the story, and the revisiting of themes and subplots and minor characters who may have exited after Act One.

Fortunately, with Bounders, I’ve had a sense of the macro arc from the beginning. In other words, I know where the story will end and why. I’ve been able to combine my tendency for pantsing with some plot work, primarily by writing to targets, meaning I almost always know what happens at the next major plot point, so I just have to keep writing until I get there. In terms of the overall plot, I think of it as a huge beam floating in the sky—like the classic black and white pictures of guys building skyscrapers years ago—and I keep erecting the scaffolding beneath to anchor it to the ground. That scaffolding is the story twists and the character interactions and the world details that allow both me and my readers to fully inhabit the world that is Bounders.

Early on in working with my first editor, Michael Strother, we started talking about expanding the series to five books. As an author, this was an amazing opportunity. It was also absolutely terrifying. I was only under contract for three books. How could I plan for five when there was no certainty it would go beyond three?

It turns out my pantsing approach made the uncertainty more tolerable. Nothing needed to change about the macro plot arc, the overarching story I’d had in my head from the beginning, I just needed to embrace my existing tendency toward ambiguity even more. Plus, the possibility of five books helped me grow and think critically as a series writer. I came to understand the importance of the stand-alone story, even in a series with an overarching storyline. While I might have gotten away with asking readers to hang on for three books to resolve a single plot arc, it just wasn’t going to work for five books. Each book had to be episodic. They had to drive the macro plot arc, while also telling their own complete stories. Think Harry Potter—the Sorcerer’s Stone, the Chamber of Secrets, the Prisoner of Azkaban, etc.—each a separate story within the greater arc of good versus evil or Harry versus He-Who-Must-Not-Be-Named. Or, to indulge my classic nerd television aficionados, Mulder and Scully are still sent to investigate the small-town ghost story even though they know the truth is out there about the smoking man and his sister’s alien abduction.

The greatest difficulty for me came when the summer of 2016 rolled around and there was still no certainty as to whether Bounders was going to be a three or five book series. I was staring down a late 2016 deadline for turning in the third book to my editor. To state what I’m sure is an obvious point: there’s a huge difference between a third book that’s smack dab in the middle of a multi-book series versus a third book that’s supposed to wrap everything up.

It was a stressful few months, especially for a pantser. It forced me to put on my plotter hat and loosely map out the two alternatives—one for third book as middle and one for third book as grand finale. That afforded me some security that I’d be able to fast draft the book once I had clarity on the series length.

Luckily, the stars aligned in September when my new editor, Sarah McCabe acquired two additional titles, officially bringing the Bounders series length to five books. I quickly got to work, using my loose outline as a (very loose) guide, and handed in the draft of the third book in December.

Today, that book, The Forgotten Shrine (Bounders 3), is released into the world. I have no doubt that readers will walk away from the book knowing there are more stories to be told about the Bounders. In many ways, my pantsing approach (mixed with a bit more plotting that I may have preferred initially) helped me stay flexible in drafting the three—make that five—book series. And, of course, I’m so excited that I get to write more books about the Bounders! In fact, I’m polishing up the fourth book in the series now. Stay tuned in the coming months for news about the title, cover, and release date for Bounders 4.

Monica Tesler is the author of the Bounders series, a middle grade science fiction adventure series from Simon and Schuster/Aladdin. She lives outside of Boston with her family. She is on the faculty for the upcoming New England Society of Children’s Book Writers and Illustrators Spring Conference (Springfield, Massachusetts, April 20-22, 2018) where she’ll teach a class on commercial series writing. She can be found online at monicatesler.com.