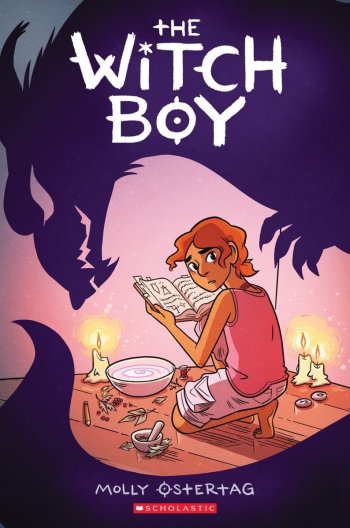 Aster has a problem. He’s 13, the age at which he should know the animal into which he will shapeshift, a crucial part of growing up as a boy in his magical family. But Aster feels no connection to any animal, and doubts he will ever learn to shift. He’s far more interested in the potions and spells that his sister and female cousins are learning as they mature into full witches. But he’s always being chased away as he tries to eavesdrop on their lessons.

“This lesson isn’t for you,” his aunt tells him in the first pages of Molly Knox Ostertag’s graphic novel The Witch Boy. “These girls are learning secrets.”

Secrets of more than one kind abound in this book. Sensitive Aster isn’t the only family member who has known he’s a witch deep down inside: He’s heard the cautionary story of Mikasi, his matriarchal grandmother’s twin brother, who sought to become a witch and became a monster instead.

Teased by both his male and female cousins, Aster wanders away from his forest home to a nearby suburban neighborhood where he can practice mild magic without being observed. There he meets Charlie, a girl who broke her leg confronting her world’s gender roles when she challenged a group of boys to a daredevil bicycle move—and did it first.

Charlie quickly becomes not just Aster’s friend but his rock, giving him a safe place to talk about his feelings—and even to practice his burgeoning witch’s magic on her broken leg.

Tensions rise back in the forest as Aster’s shapeshifting cousins start disappearing—and when one returns in a horrible monstrous form, Aster is approached by the mysterious creature that had lured them all away. The creature says that it’s the only thing that can teach Aster how to shift, and if Aster agrees to learn, he’ll become more powerful than any other shifter. Aster has a choice: to take the creature’s help and become the shapeshifter his parents and whole family want him to be, or to use his witch’s abilities to try to rescue the other boys.

Ostertag neatly shifts story conventions as her sweet and sensitive male protagonist confronts gender stereotypes and restrictions. The story also hints at more than just a dichotomy of genders, late in the book introducing a character who is both a witch and shapeshifter. The illustrations are vivid and colorful, depicting the bright calm of Charlie’s world, the mystery and menace of Aster’s, and the nightmare landscape of the creature’s.

The Witch Boy is a powerful warning of the dangers—and hurt—that results when gender roles and expectations fail to recognize who people truly are. Highly recommended.

All things medieval fascinate children’s author Diane Magras: castles, abbeys, swords, manuscripts, and the daily life of medieval people, especially those who weren’t royalty. Diane lives in Maine with her husband and son and thinks often of medieval Scotland, where her stories are set. Her middle grade fantasy adventure The Mad Wolf’s Daughter (March 6, 2018, KD Books/Penguin Younger Readers) is her debut novel.

One thought on “Book Review: THE WITCH BOY by Molly Knox Ostertag”