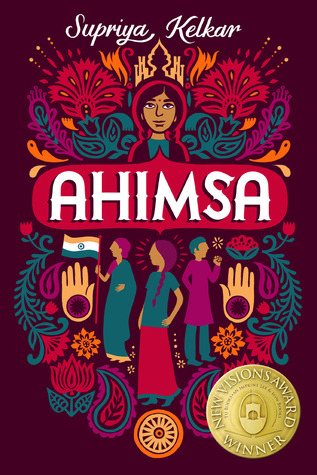 Based on India’s history before independence, Ahimsa is a fully immersive novel and I truly enjoyed reading it. While turning the pages, you’ll envision yourself walking down the dusty roads with main character Anjali, petting her family’s milk cow Nandini, and experiencing her life in the year 1942.

Anjali, age 10, is part of the top Hindu caste of India—called Brahmins—and her life with her parents is stable and happy until her mother stops working at a British Captain’s office, in their small fictional town called Navrangpur.

Believing her mother was fired, Anjali decides to paint the letter ‘Q’ on the Captain’s office property. The ‘Q’ stands for “Quit India,” a phrase coined by Gandhi, directed at Britain’s rulers to give India back to its people, to rule themselves. Anjali’s closest friend is Irfaan, a boy from a Muslim family, who is more hesitant to draw unwanted attention to himself. I think it’s because he understands, more than Anjali, that he may not even be welcome in a free, majority Hindu India. Even if Anjali and Irfaan are wonderful friends, not every Hindu and Muslim in India are able to see past their differences.

After Anjali’s mother joins in the Indian freedom fight, practicing the nonviolent principle of Ahimsa, her life changes dramatically. Anjali is resistant to it at first before following in her mother’s footsteps. Supriya Kelkar isn’t afraid to deal with the tough topics. I also appreciated the sensitivity Kelkar used while presenting views of characters from different religions and different castes.

There’s another great lesson in the story: Sometimes our zealousness can overshadow the true wishes of the people we are trying to help. The only way to learn is by asking the opinions of those very people. Anjali and her mother learn this as they try to change communal prejudices.

Anjali’s mother, Shailaja, is eventually arrested, and fasts while in prison. This is hard on Anjali as she debates whether she and her mom should have been so involved with the freedom movement in the first palce. It’s that internal struggle between doing what’s right and doing what’s easy. I love that Shailaja’s character was based on the author’s own great-grandmother and her involvement in the freedom fight.

Ahimsa shows what it truly means to take a stand. Sometimes that involves doing away with your own cultural prejudices and preconceived ideas. It means giving up personal security and comfort. For some, it means giving up your own life. Anjali encounters various hardships, from being insulted by a British official to losing friendships due to associating with people in the lowest caste of India, sadly called the “untouchables.” Some mentions of death and violence during riots may be difficult for younger, sensitive readers and should be discussed with an adult.

This story is a wonderful tool for teaching not only the history of India’s struggles for independence, but also the internal struggles India has had, which is still present in many forms today. Before I can point fingers as an American, I must accept the parallel to these problems in my own society. The messages in this book resonate for us on the other side of the world.

My husband is from India and speaks Hindi, so that gave me an advantage of knowing some of the terms used in this story. I have been to India several times, and have learned about the culture as much as I can, but there is always something new to learn.

For anyone who feels confused while reading Ahimsa, there’s a helpful glossary in the back of the book, and a note from the author. If those don’t answer your questions, you can always look for books about India at the library, or google (kids, ask your parents for help and permission first!).

Some tips before you read: In Indian culture, it’s generally considered polite, and expected, to refer to non-relative elders as Uncle and Auntie. That is why Anjali refers to neighbors and friends’ parents that way. There are also different ways to say aunt and uncle, for your actual relatives, depending on if they are related to your mom or dad.

If you looked up the meaning of my married last name, you’d learn it’s also a Brahmin last name, like Anjali’s. I do not find significance in that for my life, but for many people, last name still gives them an important role or place in society, for better or worse. When people can move past it like Anjali and her parents did, even when it was hard, then good things can happen in the world.

Coincidentally, I read this at a great time of year. Not only is India’s Republic Day on January 26th, but it’s Multicultural Children’s Book Day on January 27th, the same day as my husband’s birthday. Jai hind!

Republic Day celebrates the date when the Constitution of India went into effect on 26 January 1950, several years after their 1947 Independence. 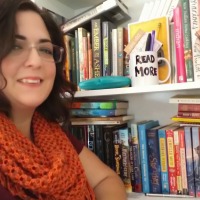 Born in Queens, NY and raised in sandy Florida, Christina Dwivedi wanted to be a mermaid when she grew up. When reality kicked in, she pursued a degree in Sociology from USF in Tampa. After a few years in Birmingham, AL, she now calls Apex, NC home. Her heart lies with reading and writing children’s fiction. Traveling with her husband and two sons is a special part of her life, whether it’s locally or to India to visit her in-laws.