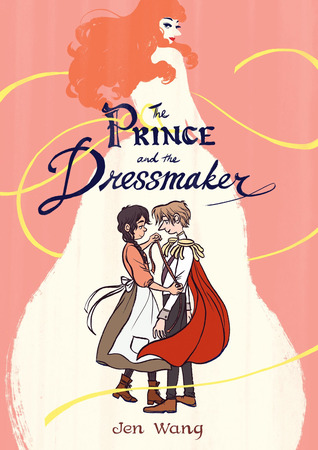 In 2014, Christine Baldacchino and Isabelle Malenfant introduced Morris Micklewhite and the Tangerine Dress to the picture book scene, a story about a boy who liked to wear a dress. Progressive parents and schools snapped this up, and many children learned that a boy who wanted to wear a dress was no big deal, just part of who he was.

Jen Wang’s The Prince and the Dressmaker is for an upper middle grade crowd, but is also a welcome addition to its own scene of books. In certain school plays for this book’s readership (including one that I saw last year), boys in dresses provide comic relief, teaching boys and girls that mockery is the expected response. I’m glad that this beautiful, engaging, and fun graphic novel will stand up against those responses.

No reader is going to laugh at Prince Sebastian. Handsome, sensitive, and kind as a boy, and glamorous and outgoing in his alter ego Lady Crystallia, Prince Sebastian redefines what it means to be a fairy tale prince.

The Prince and the Dressmaker is a fairy tale—but an edgy one with modern elements laced through its 19th century Paris. It begins with the announcement of a ball where all eligible young ladies will be introduced to Crown Prince Sebastian of Belgium, who is celebrating his 16th birthday. One particularly rebellious eligible young lady, however, comes clothed in an unusual gown—“Make me look like the devil’s wench,” she tells Frances the dressmaker, who was assigned to her at the last minute. We see the prince in shadows watching her attentively.

He’s not in love with her, though; rather, it’s her dress. And soon Frances, who both designed and sewed it, is working for the prince as his private seamstress, hired to make him dresses. It’s the job of a lifetime for her: to create costumes for a client with bold and adventurous tastes. And for him, it’s a relief: to share his secret love of wearing dresses with someone who will care about making them and him look the best they can possibly be, and who loves high fashion as much as he does.

Prince Sebastian is a prince who wears dresses. Not all the time, but when he wants to feel like himself, and feel strong. Secretly going out in Frances’s elaborate gowns as Lady Crystallia is an antidote to the parade of eligible young ladies whom his father the King of Belgium forces him to meet. And at first, this is glorious for Frances, who can let her imagination rule her designs for an appreciative client. But Frances soon realizes that while her dresses will receive great acclaim, she never will while they—and she—are the prince’s secret.

Ultimately, this is a story of being true to who you know you are. Prince Sebastian—refreshingly—never wavers in that. And neither does Frances, who risks her close friendship with the prince when she refuses to stay in the shadows any longer.

Throughout this book, the King and Queen remind Prince Sebastian of his role, while encouraging him to be himself (not quite understanding who he really is). That made me think of well-meaning parents who tell their children to be themselves, though within a certain role, that of traditional boy or traditional girl. I hope that this book—and especially its imaginative and satisfying ending—helps young readers understand that being themselves can encompass far more than their identity within gender roles, and is more important than any role could be.

All things medieval fascinate children’s author Diane Magras: castles, abbeys, swords, manuscripts, and the daily life of medieval people, especially those who weren’t royalty. Diane lives in Maine with her husband and son and thinks often of medieval Scotland, where her stories are set. Her middle grade fantasy adventure The Mad Wolf’s Daughter (March 6, 2018, KD Books/Penguin Younger Readers) is her debut novel.

2 thoughts on “Book Review: THE PRINCE AND THE DRESSMAKER by Jen Wang”