When Jonathan Rosen told me he was interested in hosting the cover reveal for his next book, From Sunset Till Sunrise, here at the #MGBookVillage, I was psyched. His debut, Night of the Living Cuddle Bunnies, was one of my favorite novels of last year. The book did something that I find exceptional, not to mention a whole lot of fun — it both creeped me out AND cracked me up.

If you haven’t read Night of the Living Cuddle Bunnies yet, do yourself a favor and read it before From Sunset Till Sunrise hits shelves. In the interim, check out my brief interview with Jonathan below — and, of course, stick around to see the new book’s cover!

Before we get to the cover, can you tell us a little about the new book?

Absolutely! From Sunset Till Sunrise is a sequel to Night of the Living Cuddle Bunnies. This time, Devin and his cousin Tommy suspect the new girl in the neighborhood is a vampire. When they go to a dance at her performing arts school, the Nosfer Academy of Talented Understudies, Devin and Tommy try to make sure this isn’t one party that lasts forever.

While the first book played off of zombie movies and films such as Gremlins and Fright Night, I tried to give this one a feel of From Dusk Till Dawn, but for middle graders.

Thank you! I find that horror naturally lends itself to comedy. You always want to yell at the people on the screen about the stupid decisions they’re making. Don’t go in the house! Why are you opening that closet instead of running away? No, the man with the hook isn’t a good person to ask for directions!

I do try to make the characters slightly self-aware about horror movie staples and comment on them, to give a wink to the reader.

Are there favorite books of yours that combine the funny and the frightening?

Of course, I’ll start with Goosebumps. There have been other scary/funny books, but that was one of the books that made the genre really successful.

Now, on to the cover. . . Did you have the same illustrator as you had for the first book’s cover?

Yes, both illustrations were done by Xavier Bonet, with design by Kate Gardner. I think both covers capture the scariness and humor.

What was your reaction when you first saw the new cover?

I absolutely loved it. Yes, I know I have to say that, since it’s my cover, but I promise I do! What’s funny is, on Night of the Loving Cuddle Bunnies, they asked me for ideas and didn’t use any of them, and I still loved it. This one, they mostly took what I asked for. So, I’m happy!

Okay, now for the big reveal! 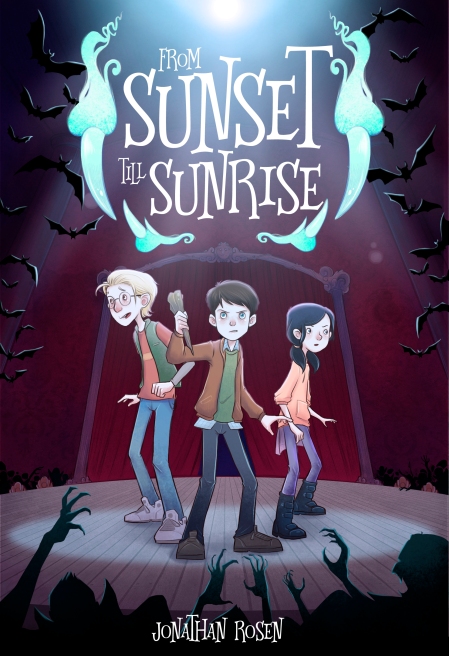 Whoa! It’s GREAT! And I love how it riffs off the first book’s cover. On that one, Devin is all alone (well, unless you count the horde of cuddle bunnies leering at him…) and looks rather nervous. Here, he’s got a crew, and he’s looking a LOT more ready for whatever is about to come his way.

Yes! I love how they’re on stage, with the vampires coming!

So, when can readers get their hands on the new book?

From Sunset Till Sunrise comes out August 21 of this year, but is available for pre-order now.

Thanks a lot for having me and sharing the cover! 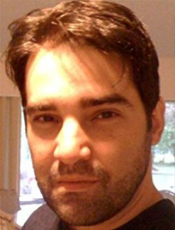 Jonathan Rosen is a transplanted New Yorker, who now lives with his family in sunny, South Florida. He spends his “free” time chauffeuring around his three kids. Some of Jonathan’s fondest childhood memories are of discovering a really good book to dive into, in particular the Choose Your Own Adventure Series and Hitchhiker’s Guide to the Galaxy. He currently writes middle-grade because he finds that he shares the same sense of humor as that audience. Jonathan is proud to be of Mexican-American descent, although neither country has been really willing to accept responsibility. You can find him on Twitter, Facebook, FromtheMixedUpFiles.Com, The Tuesday Writers and his own website, www.HouseofRosen.com.

One thought on “Cover Reveal: FROM SUNSET TILL SUNRISE by Jonathan Rosen”