I just finished reading Good Dog by Dan Gemeinhart, and it’s a book you just must read!

Brodie knows something is wrong the moment he comes to heaven. The boy that had been his owner is in danger, and Brodie cannot enjoy heaven knowing this. He must return to the world to save his boy, at the risk of losing his soul.

I absolutely loved this book. I recommend it because it is full of emotions — like love, sadness, and anger — that tug at your heart. The way Brodie’s memories came back as the story went along kept me hooked and in suspense.

You can order Good Dog through Scholastic or pick it up in a bookstore near you!

Hi! I’m Jenna. I am eleven years old, and I live in Hopewell, PA. I participate in karate, and I love books and animals.

I don’t have a sister. I have two younger brothers and I love them dearly. But growing up, I also longed for another girl in the family. Someone to share clothes and nail polish with. Someone to tell my secrets to, deep into the night. Obviously I couldn’t make my parents have another kid. (Especially since I’d have had to go back in time and had that imaginary sister born years and years ago.)

I still longed for that connection, though. It’s what I find in my close friendships now, and what I hope my two daughters will have someday. It’s also what I wrote about in my debut novel, P.S. I Miss You, which is told in letters from twelve-year-old Evie to her older sister Cilla, who has left home after getting pregnant in high school—something that’s highly disapproved of in their strict Catholic family.

Even though much of P.S. I Miss You focuses on Evie’s growing realization that she has romantic feelings for her new friend June, I don’t see this book as a love story between two girls. Yes, there is a crush and yes, there are sweaty palms and hearts skipping a beat. To me, though, the core of P.S. I Miss You is the love story between two sisters. Here are a few of my other favorite sister relationships in middle grade literature:

The Penderwicks by Jeanne Birdsall 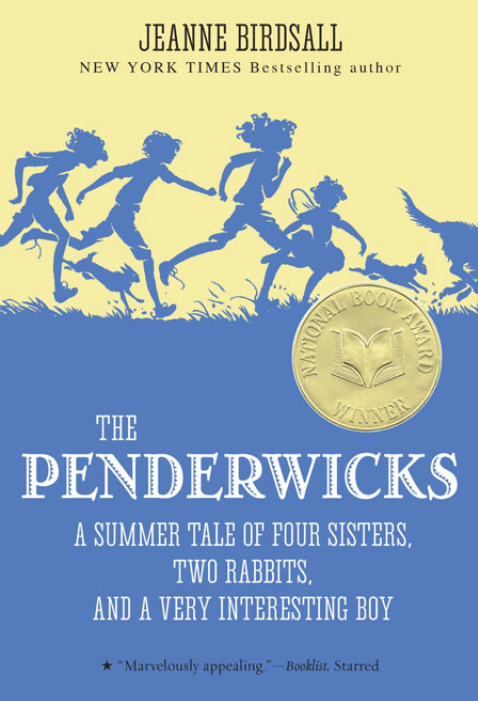 I am ridiculously excited for the fourth Penderwick book, The Penderwicks at Last, due out on May 18 of this year. I adore the relationship between Rosalind, Sky, Jane, and Batty, and the way their adventures are simultaneously so quaint and so exciting.

One Crazy Summer by Rita Williams-Garcia

I love following the adventures of Delphine, Vonetta, and Fern as they travel to Oakland to stay with their mother, who is active in the Black Panther movement. This book is so vivid with historical detail, and you can feel the emotions of all three girls as they struggle with family relationships and personal identity. (The two sequels are fabulous, too!)

The Unicorn Quest by Kamilla Benko

This is a newly published book by one of my fellow 2018 debut authors. I love this story of Claire, who follows her older sister Sophie through a ladder in a fireplace into the magical land of Arden, where she’s thrust into a struggle between four warring guilds of magic and has to find a magical treasure…and her sister.

Jen Petro-Roy was born, raised, and still lives in Massachusetts, even though she rejects the idea that snow and cold are ever a good thing. She started writing in third grade, when her classroom performed a play she had written. It was about a witch and a kidnapped girl and a brave crew of adventurers who set out to save the day. As a kid, numerous pictures of Jen often featured Baby-Sitters Club and Sweet Valley Twins books clutched in her hand, so it was just a matter of time until she started writing her own books for children.

In the past, Jen has worked as a teacher and a teen and children’s librarian. She loves running, board games, trivia, and swimming, and has a mild obsession with the television show Jeopardy! P.S. I MISS YOU is her debut novel.

The Middle Grade at Heart book club’s pick for March is . . .

THE VANDERBEEKERS OF 141ST STREET, by Karina Yan Glaser

One of The New York Times’  Notable Children’s Books of 2017: “In this delightful and heartwarming throwback to the big-family novels of yesteryear, a large biracial family might lose their beloved brownstone home, but win it back with an all-out charm offensive.”

The Vanderbeekers have always lived in the brownstone on 141st Street. It’s practically another member of the family. So when their reclusive, curmudgeonly landlord decides not to renew their lease, the five siblings have eleven days to do whatever it takes to stay in their beloved home and convince the dreaded Beiderman just how wonderful they are. And all is fair in love and war when it comes to keeping their home.

★ “Glaser’s love for the Vanderbeekers shines through in her prose and stick drawings. Readers will look forward to future adventures. A highly recommended purchase for all middle grade collections.” —School Library Journal, starred review

★  “Few [families] in children’s literature are as engaging or amusing as the Vanderbeekers.” —Booklist, starred review

“…[Karina Yan Glaser’s] contemporary family narrative preserves the winsome tone and innocence of the aforementioned classics while updating them with a rich, modern diversity of characters, settings and problems….Glaser’s warmhearted story highlights a cold truth: What is often missing in the busy lives of today’s plugged-in, checked-out families is a sense of community. In the vast village of New York City, she suggests, what it takes to raise a child can still be found on one square block.” —The New York Times Book Review

Our newsletter — including an interview, discussion questions, activity, recipe, and more — will go out March 26. Sign up for it here. Our Twitter chat will happen April 3 at 8 pm EST.

Most authors have some sense of who their audience will be when they write a novel, and I certainly did with The Mad Wolf’s Daughter: I wrote it for me, for my son, and for middle graders who wanted a fast-paced adventure to make them almost miss the bus in the morning.

The Mad Wolf’s Daughter is the book of my heart. It stars Drest, a scrappy 12-year-old girl who takes swordplay, cliff-climbing, and swimming through dangerous seas as her daily exercise. When her warm and loving family—a notoriously brutal father and five vicious brothers—are captured by enemy knights and shipped off to a castle to meet their doom, she goes after them, hauling along a young injured knight as guide and hostage. On her journey, she follows her family’s war-band codes of honor, but also develops her own codes. Oh, and she rescues pretty much everyone she runs across.

Let’s start with why I wrote this book for me.

When I was a kid, I devoured fantasy adventures: The Dark is Rising, The Sword of Shannara, The Hobbit. I loved movies that took place in ancient times: costume dramas with swords. Those stories—of quests and adventures, with witty sidekicks or wise mages—were the backdrop to my quiet life in a rural town.

I needed adventure, but I also could have used a girl leading it all—just once, please. And could she also not be the oh-so-obvious hero, but perhaps someone on the other side of the good/evil divide? I always asked myself: What if these books I loved were told from the villain’s perspective? Who would be the villain then?

So this book is, in one sense, an answer to my middle grade self: a bold medieval adventure, a historically accurate costume drama, with a somewhat villainous girl leading the show, and yes, she has quite the sword.

I also wrote this for my son. He’s eleven now, but was nine when I first began this novel. He’s always devoured books, as much as I ever did. He and I agree that there should not be “boy books” and “girl books” but just books, and that it’s important for boys to read stories with girls as protagonists. Lucky for him, there are quite a few great middle grade novels out these days that feature strong girls.

But the fast-paced classic adventures still lacked the girl who was just as strong as any boy as a matter of course. And a girl not interested in the kinds of things that many girls in such books care about. He’d read about princesses, as well as tales of awkward bookish girls, sporty girls, and nerdy girls. I wanted to share with him a new kind of girl: one whose gender was simply part of her without defining her. All within a wild adventure novel (Drest’s story is one reason that we struggle with bedtimes in our house; what kind of author parent would I be if I told him that it was time to stop reading my novel and go to bed?)

Which brings me to my third audience: middle grade readers keen on a good adventure novel. But also a question: How many of those readers—boys as well as girls—have felt alone? How many of them feel they don’t fit in? How many have spent great chunks of their lives being cautious about being themselves?

For those middle grade readers especially, I wrote a girl who was utterly unafraid to be what she wanted to be. I want those readers to think of how Drest—if she could—would step out of these pages, sling her arm around their shoulders, and offer to walk with them on their ways. How her eyes would narrow and her hand slip to the grip of her sword if she ever heard them insulted. I hope those readers look at Drest, enjoy her journey and her struggles, but also remember this: You’re important. You matter. Everyone does.  Even if you’re different. Especially if you’re different. (Twelve-year-old me needed to hear that.)

“Shuttle your courage back and forth with someone you trust” is the first of the war-band’s codes. I hope that all my readers take that to heart, and, if they need someone to trust, that this book will serve that role for them.

Diane Magras grew up on Mount Desert Island in Maine surrounded by woods, cliffs, and the sea. She works for the Maine Humanities Council, volunteers at her son’s school library, and is addicted to tea, toast, castles, legends, and most things medieval. Diane lives with her husband and son and thinks often of Scotland, where her books take place. The Mad Wolf’s Daughter is her debut novel. You can find her at www.dianemagras.com and on Twitter, Facebook, Instagram, and Goodreads.