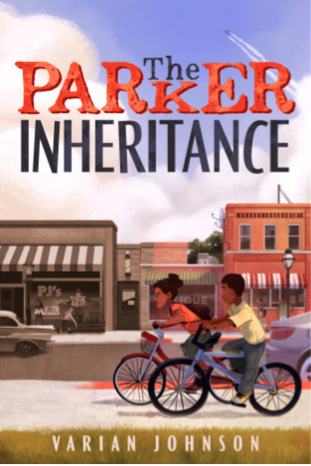 Twelve-year-old Candice Miller is not thrilled when her mom announces that they’re headed to Lambert for the summer while their house is being renovated so that it can be sold. Not only will she have to leave her father and her friends behind in Atlanta, but they’ll be staying at her dead grandmother’s house. But soon after arriving, Candice finds two important things: an unlikely friend, Brandon Jones, and a mysterious letter that her grandmother left behind for her before she died.

The letter is the first of many clues about an inheritance hidden somewhere in the town of Lambert. An inheritance that Candice’s grandmother, Abigail Caldwell, risked everything to find, leaving her to die in disgrace. Determined to clear her grandmother’s name and save her house back in Atlanta with the money, Candice uses her smarts and love of a good puzzle to start to unravel the mystery.

Her investigations lead her to the Washington family and to the historical timeline that Varian Johnson uses with great skill both to educate young readers about the horrors of Jim Crow-era racism and to build up the mystery of how Enoch Washington and his daughter, Siobhan, relate to the lost inheritance.

These historical chapters, which are interspersed between chapters where Brandon and Candice work together to investigate the mystery, also give the reader clues that our two main characters don’t know, further building the tension in the story. The biggest mystery of all: Who is James Parker and what led him to hide his multi-million-dollar inheritance for decades in the town of Lambert.

Johnson also makes deft use of cliffhanger chapter endings to keep readers frantically turning pages. In the current timeline, Candice and Brandon battle a neighborhood bully, encounter racism at the local school, and deal with some complicated family situations at home. At the same time, in the historical timeline, Siobhan and her father move from the usual parent-child conflicts over dating and life choices to a more fraught conflict with life or death stakes. Both timelines separately build in tension over the course of the story, and the use of cliffhanger endings makes us race from timeline to timeline as we try to gather clues alongside Candice and Brandon.

I won’t give you any more spoilers in case you haven’t read the book yet, but I will say that Siobhan’s story was so compelling that I hope Varian will consider writing a companion novel just for her! It would make a wonderful historical YA set at the end of school segregation in the south.

Whether you’re writing something of your own or working with kids on their creative writing, look for ways that you can use multiple points of view to create tension and mystery. In The Parker Inheritance, Varian Johnson uses this technique to create page-turning drama as both the present-day and historical timelines reveal the mystery one tantalizing detail at a time.