Ask any published author and they will tell you that the road to publication is long and hard, often spanning several years. I’m not any different, and today after many years of writing, editing, praying for book deals and all the other things that go into the production of a book, I’m about to be the proud mama of a little fictional character named Yasmin.

Yasmin Ahmad is a spirited second-grader who’s always on the lookout for those “aha” moments to help her solve life’s little problems. Taking inspiration from her surroundings and her big imagination, she boldly faces any situation assuming her imagination doesn’t get too big, of course! A creative thinker and curious explorer, Yasmin and her multi-generational Pakistani American family will delight and inspire readers.

The short synopsis of the book is hopefully sufficient to hook readers, but there is a deep and lengthy explanation of what Yasmin truly stands for. I think there is no better time than now to talk about that.

Yasmin is a mirror to all those little boys and girls who come from a minority, or non-white, background. She is Pakistani American, an immigrant group that’s growing rapidly in the United States. Like my own children, she is first generation American, a life situation that is not as easy as it sounds. So many children in our school system are first generation, whose parents are from a different culture, who know more than one language, and who speak a different language at home. Pakistani, Indian, Syrian, Mexican… there are millions of kids who can read Meet Yasmin and see themselves in the pages of this book.

I imagine Yasmin to be a balm for those children, as they finally read a series about someone just like them. I’ve been seeing the faces of kids light up at schools and libraries as I talk about the book even before it’s published. They love seeing a brown character, they love watching Yasmin’s mama put on her hijab and her baba play with her. It’s all familiar and safe and comfortable, which are things we want our students and children to feel all the time.

Yasmin is also a window to other readers, those who aren’t Muslim, or immigrants, or brown. Those who may think they’re part of America more so than their classmates. This book is a way for them to recognize the American-ness in all of us, to see that no matter what clothes you wear or what language you speak, we are citizens of this world together. It’s a series (and a character) that teaches empathy and understanding, that offers an opportunity to witness another culture not just by reading about it but by experiencing it firsthand. The back matter of the Yasmin books have an Urdu glossary, fun activities and recipes that will allow educators to teach more than just the story, and readers to learn more than what Yasmin alone has to offer. 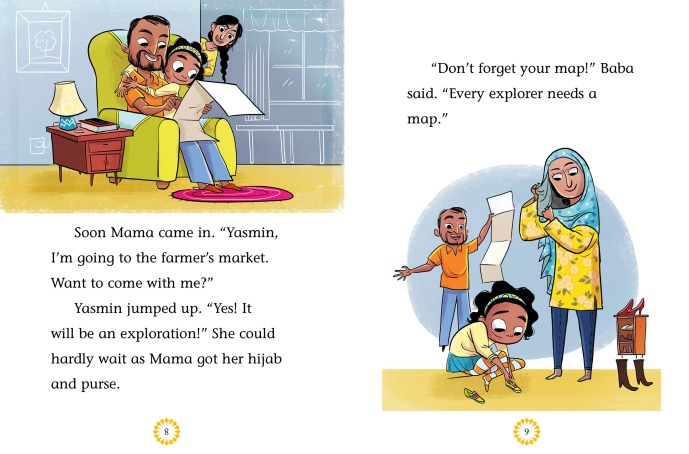 To make that experience even more inviting, I’ve created a flipgrid (link: flipgrid.com/ab0f3e) with password MeetYasmin! that will grow in the coming months and years, providing an online space for kids and adults to share what Yasmin means to them. I encourage students and teachers to visit the grid to record their videos, or to listen to others. In the fall 2018-19 school year I’ll be adding loads of new content to this grid.

Saadia Faruqi is Pakistani American author of the early reader Yasmin series by Capstone. She also writes fiction and essays for adults and is editor-in-chief of Blue Minaret, a magazine for Muslim writers. She was profiled by O Magazine in 2017 for her interfaith and intercultural sensitivity trainings. Visit her website at www.saadiafaruqi.com.

One thought on “Introducing Yasmin, a Window and a Mirror — by Saadia Faruqi”