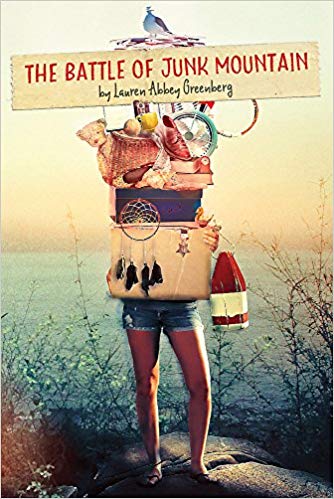 Maine is a beloved state, as I well know. I grew up here, moved away at one point, and then moved back. It’s a state that inspires a lot of visits, and a lot of fiction—from both people who have lived here and people who haven’t. For someone who lives here to read a book about Maine can be a sensitive matter. As a middle grade reader, I was especially critical of stereotypes of rural life and the kind of people I grew up with on the Maine coast.

Middle grade kids in Maine won’t feel that way about Lauren Abbey Greenberg’s new novel of growing up The Battle of Junk Mountain. That may be because Greenberg has summered in the state for twenty years and has a strong sense of what it’s like here. But it’s also her talent at sketching characters with the tiny edges of heart and humility that draw them well beyond any stereotype.

Take Bea, the grandmother at the center of Shayne’s annual summer visit to Maine. Bea has always been a collector, a frequent visitors to flea markets and yard sales, but recently has become more than that: a hoarder whose house is packed with knick-knacks, old clothes, and other people’s discarded stuff. It’s a collection of stuff that means a lot to Bea, Shayne realizes after she tries to sell some of it behind Bea’s back. Bea’s finances are precarious and Shayne thinks she can help with that as well as with the state of Bea’s house, but her attempt shakes something deep in her and her grandmother’s relationship.

Bea is not a sweet, gentle grandmother, nor a fierce, grand fighter of a woman, but a very real person, a woman deeply wounded by her lobsterman husband’s tragic death at sea who is trying to live through memories and the comforts she can garner with the items she collects. I’ve known people like Bea, women with immense inner strength, weighed beneath obsessions that begin to rule their lives.

This story is the core of the novel, but The Battle of Junk Mountain is also a what-happened-this-summer story of friendship. One bond is Shayne’s with her “summer sister” Poppy, a summer best friend. This bond seems to have slipped a knot, just like the friendship bracelets they used to make together. The other bond is with Linc, the grandson of an old, tough, angry lobsterman of a new neighbor. Linc is an avid Civil War reenactor, which initially puts Shayne off, but his lack of shame, pride in his interests, and genuinely kind heart show her that a good friend doesn’t necessarily fit in a mold.

This is a story that will show young readers that an ordinary girl can be a true hero, act nobly, and face her fears when the time is right. And while it’s a story that will satisfy readers everywhere, it will feel especially real and right to kids who live on the New England coast. 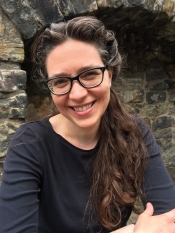 Diane Magras is author of the NYT Editors’ Choice The Mad Wolf’s Daughter, which came just before The Hunt for the Mad Wolf’s Daughter. All things medieval fascinate Diane: castles, abbeys, swords, manuscripts, and the daily life of medieval people, especially those who weren’t royalty. Diane lives in Maine with her husband and son and thinks often of Scotland, where her books are set.