MG Book Village: Thanks so much for choosing the MG Book Village to host your cover reveal. We’re thrilled to have you! Before we get to the new book and its cover, would you care to introduce yourself to our readers?

Ariel Bernstein: Thanks so much for having me at the MG Book Village! I’m an author of picture books and chapter books. I love to write about balloons, animals, and kids with a lot of character. I live in New Jersey with my family and a very energetic cat.

All right — let’s get right to the new book, the third book in the WARREN & DRAGON series. Can you tell us a bit about it?

VOLCANO DELUXE is about Warren and his pet dragon, Dragon, who see a deluxe volcano building set at a toy store. It shoots lava in the air and they want it more than anything! Some kids would use their allowance to buy it, but since Warren has never been one to do his chores, he and Dragon have to think of other ways to earn money. Unfortunately, Warren’s twin sister mistakenly thinks Warren is trying to earn money to buy toys for kids in the hospital. Soon, everyone thinks Warren is doing a good deed. Warren has to figure out who he really wants to help, or no one may get the volcano deluxe building set!

We loved your Nerdy Book Club post from a few months back about “thinking outside categories” when giving young readers book suggestions. Would you care to talk about that at all, and would you like to share some “outside-of-category” books to pair with your WARREN & DRAGON books?

Thank you! I really enjoyed writing that post. There is a lot of discussion with parents, teachers, and librarians about what books kids should be reading. Some people think that kids should only read books at or above their ‘level.’ Conversely, I believe that kids should read whatever books they are drawn to, as it will better help to foster a lifelong love of reading. I saw with my own daughter that while she has started to enjoy middle grade books, she still loves reading picture books, chapter books, and especially graphic novels.

Here are some great “outside-of-category” books to pair with WARREN & DRAGON:

Okay, now let’s get to the cover. Were you involved in the creation process at all?

I wasn’t involved in creating the cover (other than thinking up the title!). But it’s pretty common for an illustrator to work on a cover directly with the editor and art department. Luckily I’m friends with Mike Malbrough, the illustrator, and I sometimes get to see sneak peeks of the art which is always fun!

Let’s check it out! Wow! It’s fantastic! What did YOU think when you first saw the cover art?

I loved Mike’s art when I first saw it! He really captures the silly humor of the characters and story, as well as Warren’s relatable struggles. In VOLCANO DELUXE, there’s a scene where Warren and some other kids are taking a photo for the town newspaper, and Dragon manages to photo bomb it. I was hoping Mike would choose to illustrate it, and he did! The illustration is so funny and makes me laugh whenever I see it.

When can readers get their hands on the book?

VOLCANO DELUXE is available now for pre-order online and from local stores, and can be found in bookstores and libraries starting April 2, 2019! The first two books in the series, 100 FRIENDS and WEEKEND WITH CHEWY, are out now. 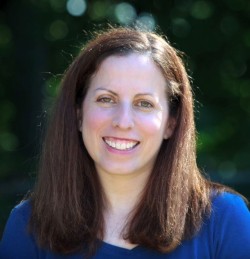 Ariel Bernstein grew up outside of Philadelphia (developing a cheesesteak obsession), went to college at Barnard in New York (developing a sushi obsession), and now lives in the suburbs of New Jersey with her family (developing a marshmallow obsession). She doesn’t have a pet dragon, but does have the occasional herd of deer show up in the backyard. Besides writing children’s books, Ariel’s worked in a movie theatre, at a Baskin-Robbins, as a camp counselor, as a paralegal, in human resources, and as a stay-at-home mom. Visit her at arielbernsteinbooks.com.