Dystopian books explore what might happen to our world when something fundamental is different from what we know. Often, it’s society-based, though sometimes technology is part of it. These are books that start with a “What if” world tangled into our own. We see aspects of life we recognize, but something feels off or wrong or just plain disturbing. And it’s the main character’s role to figure out how to survive, or escape.

When I first read Melanie Sumrow’s middle grade debut The Prophet Calls, I knew it was based in the real world, and what is no doubt a very real world for certain populations in the United States. But this book felt dystopian to me. I’ve known people from religions akin to, but fortunately not as restrictive, as the one that dominates this narrative, and I’ve read of the religions that keep similar tight bonds on their women and girls, but never explored the story of one of those girls.

Yet Gentry’s story is not what you expect. It’s partly a tale of rebellion against a religion that keeps women and girls submissive. But it’s a fast-paced thriller as well, as the best dystopian stories tend to be.

The Prophet Calls begins with a children’s game: “apocalypse,” in which government agents are chasing God’s chosen. Gentry has just turned 13 and is therefore, according to her people, a woman. And a woman cannot play a children’s game. Yet she does, with her sister Amy fleeing from the “agents,” who her include her brother Tanner and her friend Channing Snell. We’re drawn into the chase, into escape and hiding, in a scene that is strangely tense for a children’s game. But this is by design. In the first chapter, Sumrow plants the seeds of much that will be important later in her book: the multiple “mothers” each child family has, Amy’s terror that Gentry will leave her behind, Tanner’s wild abandon, the bruise on Channing’s neck which we see as he urges Gentry to play, and that inexorable sense of dread.

That dread is present when Tanner and Gentry sneak off to perform at a music festival, a competition that the two, both talented violinists, have planned to attend for months. But they must attend in secret: The Prophet, the ruler of their enclosed religious community, has phoned from his prison cell to decree that woman are no longer allowed to leave the compound. This happens the day of the game, Gentry’s 13th birthday, in her first hours of being a woman.

But that doesn’t stop her. Gentry and Tanner perform. They do well. They come home. And they’re caught. And Tanner, Gentry’s friend as well as her brother, is banished from the compound, worse than dead, she’s told. And Gentry is forbidden to play the instrument that gives her such joy and freedom.

More people whom Gentry loves are banished. “Women” (of all ages) with whom she is close are forced into marriage with men of the Prophet’s choosing. But this “woman” tries to fight, though doesn’t know how, and soon it’s a matter of survival.

This is a powerful read, one rife with opportunities for discussion of restrictive gender roles, of religious rules, of what freedom really means. It’s an upper middle grade book, but perfect for a tween nearly but not quite ready for young adult. And it will introduce some of the dystopian themes that young will find in the young adult genre, but its own middle grade—chillingly realistic—manner. 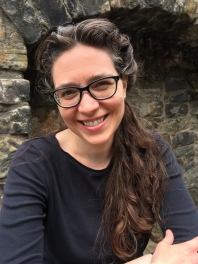 Diane Magras is author of the NYT Editors’ Choice The Mad Wolf’s Daughter, which came just before The Hunt for the Mad Wolf’s Daughter. All things medieval fascinate Diane: castles, abbeys, swords, manuscripts, and the daily life of medieval people, especially those who weren’t royalty. Diane lives in Maine with her husband and son and thinks often of Scotland, where her books are set.

One thought on “Book Review: THE PROPHET CALLS, by Melanie Sumrow”