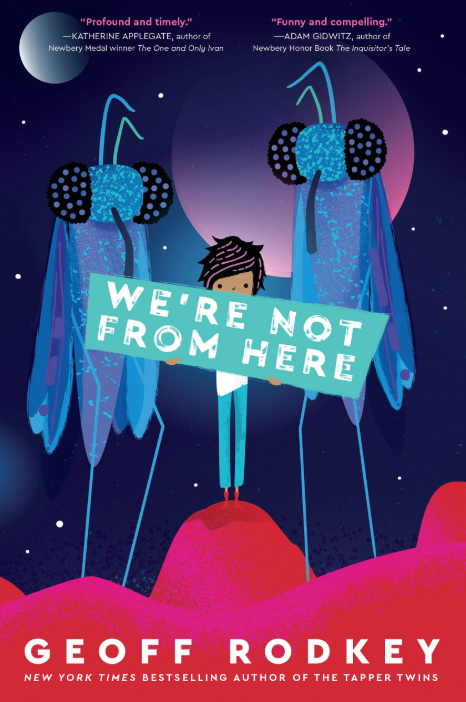 Before we begin, I just want to say thank you, Geoff, for stopping by the MG Book Village to celebrate We’re Not From Here and to chat about the book. Before we get to the new book, would you care to introduce yourself to our readers?

Sure! This is my ninth middle grade novel, after the Chronicles of Egg trilogy, the four books in the Tapper Twins series, and Stuck in the Stone Age. Before I got into books, I wrote movies, including Daddy Day Care and RV. And before that, I worked in a bunch of different media, including TV, magazines, speechwriting, and video games.

Now – We’re Not From Here. Can you tell us about it?

It’s the story of a family of humans who immigrate to an alien world after Earth is destroyed in a nuclear war…only to discover that the aliens who invited them have changed their minds about opening their society to a species that just incinerated its home planet. Because the family has nowhere else to go (assimilating is literally a matter of life and death), they have to figure out how to persuade the planet’s government to let them stay even as they’re being subjected to various kinds of scapegoating and discrimination.

I can’t imagine a darker, more dire premise for a book. Yet, like all your books, We’re Not From Here can be downright hilarious. Was it important for you to make sure the story was humorous? What do you see as the role of humor – both in fiction and in life?

I didn’t set out to write a funny book, and it’s probably too dark a premise to be a comedy in the usual sense. But the human characters in the story are desperately trying to persuade their alien hosts that—despite our often horrific capacity for violence—humans have other qualities that are redeeming enough to make it worth the risk of allowing us to live among them. And in trying to figure out for myself what human attributes are unambiguously good, one of the answers I came up with was humor. I think life would be a lot sadder and less interesting without it.

We’re Not From Here is told in first person, by a young human named Lan. You made a very interesting decision regarding Lan. Would you care to discuss your motivations for doing so? What does this do for the story, and for the reader of it?

In the book, I never describe Lan’s gender, ethnicity, or body type, because those physical attributes don’t matter much in the context of a story that’s set in a non-human society—and by leaving them out, I could give every kid who reads the book the freedom to imagine whatever version of Lan works best for them.

I wanted to make it as easy as possible for kids to imagine themselves in Lan’s shoes, and to empathize with how hard it is to be in that situation—to get scapegoated, discriminated against, and blamed for things you had nothing to do with, simply because of where you come from.

Full disclosure: I borrowed this device from an adult sci-fi author, John Scalzi. In 2014, he published a book called Lock In, and I got three-fourths of the way through it before I realized my default assumption—that the main character was a white guy—wasn’t necessarily correct, and that they could just as easily be a woman, an African-American, etc. As a reader, this really opened my eyes to the notion that a big chunk of the way I perceive the world doesn’t come from facts, but from assumptions I make based on my own personal history and biases. These assumptions might seem true for me…while not being true at all for someone looking at the same set of facts from a different perspective. That realization was pretty profound—it was like taking an empathy vitamin, and it had an impact on me way beyond my enjoyment of the book.

I decided to use the same device for We’re Not From Here not just because it fit perfectly with the book’s themes of inclusion and acceptance, but because I wanted to give middle grade readers the chance to have the same kind of empathy-broadening experience that reading Lock In gave me. Plus, I figured the overlap between John Scalzi’s mostly adult readership and the 8-to-12-year-olds who might pick up We’re Not From Here is slim enough that borrowing his narrative conceit won’t be too unfair to him. (Although I still feel a little guilty about it.)

We’re Not From Here is certainly science fiction, but a particular sort of science fiction. Reading it, I was reminded of certain books and stories by Kurt Vonnegut, and also of Andrew Smith’s Grasshopper Jungle. Are you a fan of sci-fi? Did you read it growing up? What were, or are, some of your favorites?

I’m not a hardcore sci-fi fan, although I’ve enjoyed a lot of books in that genre over the years. As a teenager, I loved Slaughterhouse Five, Dune, and Brave New World. In my 20’s, it was William Gibson’s Neuromancer and Neal Stephenson’s Snow Crash. I’ve read a bunch of Stephenson since then—Cryptonomicon and Seveneves were both great. I went through a Terry Pratchett phase recently and read half a dozen of his Discworld books, which are hilarious. M.T. Anderson’s YA novel Feed was awesome. Like millions of other people, I devoured the whole Hunger Games trilogy in about a week. And I’ll read almost anything John Scalzi writes, even when I’m not stealing his narrative devices.

The situations and themes at the forefront of We’re Not From Here are incredibly timely – and seem to grow even more timely by the day. Did you set out to write such a book, or did the story come to you more naturally?

The book was definitely inspired by what’s been happening in America over the past few years. When I was growing up in Freeport, Illinois, my public school teachers drilled into us the idea that America is a melting pot of races, religions, and cultures that all come together in one society. Where we came from doesn’t matter: we’re all just Americans. That ideal might be naive, and it’s been contradicted in pretty appalling ways throughout our country’s history. But to me, it’s still worth striving for, and it’s a core element of our national character.

I got to thinking about this a lot in the fall of 2015, right after I did some school visits in Wichita, Kansas. Culturally and demographically, Wichita’s similar to the town where I grew up, and at one school I visited, I noticed a few Muslim girls wearing headscarves in the audience. Seeing them in a Kansas middle school initially struck me as a heartwarming reminder of that ideal of the melting pot.

But on the same day I came home from Wichita, the Paris terror attacks happened…followed a few weeks later by the San Bernardino attack…and then a presidential candidate’s proposal that the government ban all Muslims from entering the U.S. The idea that a nation founded in part on the principle of freedom of religion would even consider such a thing struck me as a pretty fundamental violation of what I’d been raised to believe it means to be an American. And as events like this happened, I kept thinking back to those little Muslim girls in Wichita. It broke my heart to imagine what kind of a lousy month they must be having—because I strongly suspected, based on my own experience growing up in a similar culture in the Midwest, that there was at least one kid on the school bus calling those sweet little girls terrorists.

I wanted to write a book about the injustice of that—about getting scapegoated and harassed not because of anything you’ve done, but just because of where you come from. Like the ideal of the melting pot itself, I wanted the story to be inclusive of everybody, and to speak not just to the kid getting bullied in real life, but the kid doing the bullying. It took me a while, but eventually I figured out that the best way to do that was to take a metaphorical step back and make the story about someone who’s getting scapegoated not because of the kind of human they are, but just because they’re human.

What do you hope your readers – in particular the young ones – take away from We’re Not From Here?

My deepest hope is that kids who read the story and identify with Lan will come away with a greater sense of empathy for people who are in similar situations in real life. But the story’s metaphorical enough that I’m not sure how many kids will see the real-world parallels without a nudge in that direction from a teacher or librarian. My own 12-year-old son, who’s pretty well-informed about current events, loved the story—but he read the whole thing without ever pausing to wonder if it had any connection to things he reads about in the news. It was a somewhat humbling reminder that what might seem to an adult like a blindingly obvious political metaphor can, to a kid, just be a cool story about trying to get along with a bunch of giant insects who don’t like you.

Many of our site’s readers are teachers of Middle Grade-aged kids. Is there anything you’d like to say to them – in particular those planning to add We’re Not From Here to their classroom libraries?

When they talk to their students about the book, I’d encourage them to point out that every kid has the freedom to imagine whatever kind of Lan they want. Because the lack of physical detail is all subtext, a lot of kids probably won’t even notice that they haven’t been told Lan’s gender, body type, etc. in the text—they’ll just automatically fill in the blanks without realizing it.

But if you draw their attention to it, I think it can make for a really interesting conversation around the idea that reading isn’t just a passive activity, and that every reader’s experience of a book is unique. Unlike movies and TV, written stories are really a collaboration between two imaginations: the writer’s and the reader’s. If you think of a story as a house, all a writer does is draw the blueprint. It’s the reader who has to actually build the house in their mind, and no two readers’ houses will ever look exactly the same. Every book is like this—We’re Not From Here just makes that imaginative collaboration a little more obvious by putting slightly less detail into the blueprint.

Where can readers find more information about you and your work? 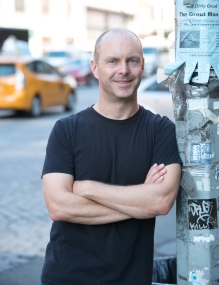 I have a website at geoffrodkey.com, where you can learn more about both my books and my background. Also, Random House created an Educator’s Guide for We’re Not From Here—there’s a PDF at this link, and I’ll happily send a physical copy to anyone who emails me via the contact page on my site. And until the end of this school year, I’ll be offering free Skype visits to any classroom or group that wants to talk about We’re Not From Here, so send me an email if you’re interested!

One thought on “Interview: Geoff Rodkey”