Kathie: Hi Amy! It’s such a pleasure to talk to you about your upcoming book, TEN THOUSAND TRIES, which will be released on July 13th by Atheneum Books for Young People. I had the pleasure of reading an eARC, and this is a story that’s going to tug on a lot of heartstrings. Can you please tell our readers what it’s about?

Amy: Hi Kathie! Thank you for reading. Kirkus Reviews just posted: “A heart-tugging and uplifting story about never giving up – on the soccer field, on loved ones, and on life.” I really love that summation! Going a little further: GOLDEN “Macaroni” Maroni is determined to become master of his eighth grade universe by channeling his hero: international soccer superstar, Lionel Messi. But first he’s got to survive middle school, win the soccer championship, and stop Lucy Littlehouse from moving away. If he can do that, then maybe he can prevent Dad from losing to the three worst letters in the alphabet: A-L-S. Golden believes he can find a way – even if it takes TEN THOUSAND TRIES.

Kathie: I know the inspiration for this story came from a few different places, and it sounds like you’re no stranger to soccer life. Can you tell us a bit about the biggest influences on this particular book?

Amy: Every fall I coach a co-ed middle school soccer team, a cast of rotating characters whom I always grow to adore. My son, who played on the team, was very much the inspiration for our main character, Golden. He too was OBSESSED with Messi. He became convinced that with enough effort he could become GREAT (He even had a 10,000 hours chart on his wall :).

At the same time, he had a teammate whose father (Eric) had been recently diagnosed with ALS. Eric was a really good friend of ours. It was surreal and heartbreaking to watch him decline physically, to go from super athletic and strong to sitting in a wheelchair unable to move. This was juxtaposed with my middle school boys whose #1 goal was to become bigger, stronger, and faster. It really made me think about our culture, our values, and what truly makes a boy a man. In the end, Golden concludes – it’s not bench press stats that matter most.

Kathie: My favourite character was Benny, who was often in the background and yet so supportive and loyal to Golden. Did you have a character that you most enjoyed writing?

Amy: I have the strongest attachment to Golden as he is the main character and was in my head day and night! I still feel very attune to his emotions. But I also loved writing Benny Ho and Lucy Littlehouse (these characters are very real to me!) Much of Benny’s story was cut due to my already-long word count. But early on, I had two friends help me flesh out what it’s like to be Asian-American living in a small town that’s mostly white. I’ve occasionally seen abusive language on the athletic field, but I’ve also seen how the best teams and leagues unite diverse groups of people.

Kathie: Golden desperately wants to grow physically as he’s smaller than his peers, but he certainly goes through some emotional growth in the story! He was in such a state of denial about his dad’s illness, which is a common reaction for many people when faced with the impending loss of a loved one. What advice do you wish you could have given Golden?

Amy: I’ve realized a few things about advice, one of them being: use it sparingly. With Golden, I knew what was coming, but no one – not Golden’s best friends, parents or coaches (not even me as the author!), could dissuade him from believing he could “fix” Dad. I wouldn’t change that. I’d let it play out like it did. Being (ahem) an oft-unrealistic optimist myself, I loved Golden’s fierce hope. I’d say, “Golden, no matter what, you’ll always have a dad that loves you. Our mortal bodies die, but love doesn’t.”

Kathie: ALS is a disease we don’t often see mentioned in middle grade fiction. You discussed it with sensitivity and compassion, and yet the realities of the disease and its impact on families are harsh. How did you find a balance between the truth while still incorporating hope that’s so important to stories for this age group?

Amy: It is harsh. With ALS, one day muscles work, and the next day you suddenly can’t scratch your nose. But I didn’t want to write a sad story, nor did I want to treat an incurable disease too lightly. I tried to balance reality with enough humor and hope to keep the reader turning the pages. The sports angle helped tremendously – who can’t help but root for the underdog? Like Golden, middle schoolers are so funny and resilient. They see goodness and light where adults have grown weary and more cynical. Some of that is inexperience and naivety, but it’s also a superpower to see the possibilities that others can’t – and that’s really fun to write.

Kathie: TEN THOUSAND TRIES is a story that can be recommended to many different kinds of readers because it explores many topics (soccer, parents with an illness, adjusting to changing friend relationships, grief, community). What do you think it’s important for young readers to know about this story?

Amy: That love might break your heart, but it’s still worth it x 10000. It feels impossible at the time, but with every hard thing, there are silver linings – even if it takes a long time to see them. I’d tell readers that there are some sad parts in the book, but also a lot of funny, happy moments – just like life.

Kathie: Are you working on another writing project at the moment?

Amy: Yes! Something very different for younger readers. It’s a story about a very dignified nanny and six rambunctious, naughty children. Oh, and the nanny is a dog.

Kathie: Where can you readers go to find out more about you and your writing?

Amy: My website is: https://www.amymakechnie.com. You can go there to subscribe to my newsletter, read reviews, and find my books!

Kathie: I really appreciate you chatting with me today, Amy. I wish you all the best with your book’s release, and I sincerely hope it finds those readers who need it most.

Amy: Thank you for having me, Kathie. I love how you said that. I hope Golden, Benny, and Lucy find their way into many hearts, too! 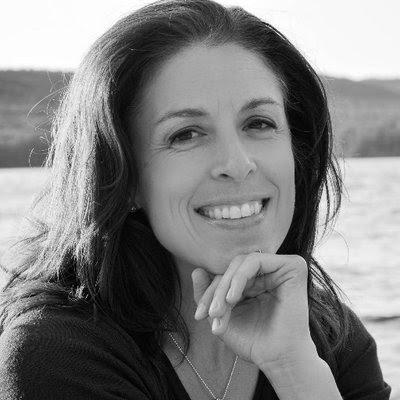 Amy Makechnie is the author of The Unforgettable Guinevere St. Clair and Ten Thousand Tries. She writes from a small New Hampshire town, teaches an Anatomy and Physiology class, and mothers a wily flock of children (+ one rascal of a puppy), all of which provide daily writing inspiration.