HEIDI: Happy National Sisters Day! In honor of this made-up but still absolutely valid holiday, Kati and I thought we’d chat a little about what it’s like to write with your sister. And if you stick around, we’ll be giving away a few books at the end. 😉

KATI: Most people are surprised when I tell them I cowrite with my sister. Usually they want to know how that works, and how we don’t kill each other by the end of the book.

HEIDI: Exactly. 😉 And since we both liked most of the same books and shows growing up, and are interested in a lot of the same themes, writing together has worked out really well. Our brains overlap quite a bit.

KATI: That is a terrifying image.

HEIDI: A little bit! As kids, Kati and I used to play pretend together all the time, so writing a story together felt almost like that. It was really fun. And then somewhere along the way, we realized that we actually thought our story had the potential to make it. So once we finished our first extremely rough draft, we decided to take it more seriously.

KATI: And we’ve been serious ever since!

KATI: Our third and final book in the Mystic Cooking Chronicles, A Pinch of Phoenix, just came out last month, but we’re already working on a new series together. This one will have aliens and ghosts and other supernatural creepiness. So it’s very fun to write.

HEIDI: Speaking of fun, here’s a fun fact in honor of National Sister’s Day: one of the villains in our Mystic Cooking Chronicles trilogy is loosely inspired by our older sister.

KATI: We love you, Rosi! But maybe you should have been nicer to us when we were little. ;D

HEIDI: We haven’t actually written any sisters books . . . yet. But we both love stories where those relationships are portrayed. One of my recent middle grade favorites is Prisoners of Ice and Snow by Ruth Lauren. Valor purposely gets herself sent to an impossible-to-escape prison in order to try to break her sister Sasha out. It’s a wonderful fantasy adventure, very action-packed, and I loved the relationship between sisters Valor and Sasha. I tore through this book in a day.

KATI: One of my recent favorites is actually young adult . . . Stephanie Garber’s Caraval. In it, sisters Scarlett and Tella would do anything to help each other, which is the driving force behind the whole story. At the same time, their relationship is a little complicated, just like most sisters. Plus there’s the fantastic world building, romance, and excitement.

HEIDI: So today, Kati and I want to give away a “sisters bundle” of a signed copy of our complete Mystic Cooking Chronicles trilogy, plus a hardcover copy of Ruth Lauren’s Prisoner of Ice and Snow, and a signed hardcover copy of Caraval.

KATI: And since we’re always looking for more good sister stories, please comment and tell us any you’d recommend so we can check them out!

KATI: First of all, thank you to MG Book Village for hosting us on our book birthday! Today, Heidi and I are celebrating the release of our second book, A HINT OF HYDRA! In this sequel to A DASH OF DRAGON, our brave and grumpy chef is trying to run a restaurant while also attempting to solve a murder mystery in order to stop a war between the elven mafia and a group of steampunk scientists.

HEIDI: The whole story takes place during the Week of Masks, which is basically like Halloween. But for an entire week. It might not surprise any of you to learn that Halloween is Kati’s absolute favorite holiday. And she managed to trick me into agreeing on using that as the setting when she used the “m” word.

HEIDI: That too. But I was thinking “masquerade.”

KATI: Oh. Well, I remembered how obsessed you were with Phantom of the Opera. So I figured anything that included a masked ball would be an easy sell with you.

HEIDI: This is the problem when your co-writer is also your sister. She will use your weaknesses against you.

KATI: Speaking of being sisters who co-write, we get a lot of questions from people asking us what our system is like, and how we manage it without killing each other. Which are both very valid questions. Especially the second. 😉 So in honor of our book birthday, we thought it would be fun to answer both of them here.

HEIDI: I actually think the fact that we are sisters has made it easier to co-write, manipulation aside. I know I can be completely honest with Kati about her writing, and vice versa, and even if we argue over plot points or fictional recipes—

HEIDI: For some reason, Kati does not believe salamander stew is an appropriate meal for a high-end establishment like our main character’s restaurant, Mystic Cooking.

KATI: Stew is not high end. Also it sounds disgusting.

HEIDI: When we disagree on things like this, we’ll have a little…discussion. And, okay, sometimes I’ll add in salamander stew whenever it’s my turn to write a cooking scene, just so Kati’s forced to change it. But I know ultimately, our relationship will survive these things.

KATI: Before we started writing A DASH OF DRAGON, and then A HINT OF HYDRA, we spent a lot of time brainstorming together, figuring out the world and the main characters, as well as the overall plot. Which is good, because I like to outline, and Heidi is a total pantser, so it was my only way to keep her somewhat on track.

HEIDI: Kati might not admit it, but she loves when I veer way off outline and add spontaneous characters and situations. Just like I’ll never admit it, either, but I appreciate the way Kati gets us back on track again.

KATI: For the actual writing itself, we have a pretty loose method. I’ll write a section, usually a couple of pages, and then send it to Heidi. She’ll go through my section and revise it, making any changes she wants, before writing her own section. I’ll read through her revisions, make my own, and then write my next section. And repeat.

HEIDI: We’ll call each other before making any major changes. And sometimes I’ll come across a line that I can just tell Kati really enjoyed writing – those lines I leave alone. She’s good about doing the same for me. Anything else, though, and we’ve each given the other free reign to change whatever we want. If one of us changes something and the other really doesn’t like it, then we’ll discuss, but that rarely happens.

KATI: When we finish a draft, we’ll both go through the entire manuscript and make a list of everything that needs to be fixed, and then we’ll divide up that list. I’m better at logistics and settings, and Heidi’s better at dialogue and character interactions, so when we decide who is fixing what, we keep our strengths in mind.

HEIDI: Kati will do another sweep through the whole manuscript after we’ve fixed everything to make sure it all flows, and then I’ll do a final sweep to tighten up the writing. This way, by the end, our writing is all mixed up together—

KATI: I know what you’re thinking. Don’t do it.

KATI: Ugh. You see what I have to work with here?

HEIDI: Heh heh. You love it. You know you do.

KATI: I can’t believe I’ve agreed to write yet another book with you.

KATI: It’s alright. We can tell everyone here the good news…which is that we will be writing a third book in this series! We’re really excited to get to finish up this trilogy and can’t wait to talk more about that book in a few months.

HEIDI: It’s going to be epic! Our series also has a spiffy new name: The Mystic Cooking Chronicles. When we first started writing A DASH OF DRAGON way back in the day, it was titled “Mystic Cooking,” so I’m really happy we get to work that original title back in as part of the series title.

KATI: Heidi is very sentimental about things like that. Another weakness…

KATI: Sure would be a shame if anything were to happen to the ole Mystic Cooking…

HEIDI: What are you planning? Kati? Kati!

KATI: And look at that, we’re out of time. ;D Thank you everyone for joining us today! And if there are any other co-writers out there, we’d love to hear your methods of writing together.

HEIDI: You can find us on twitter: @ktbartkowski and @hidlang. We’ll be celebrating our book all day with a series of giveaways, so please stop by and say hello. 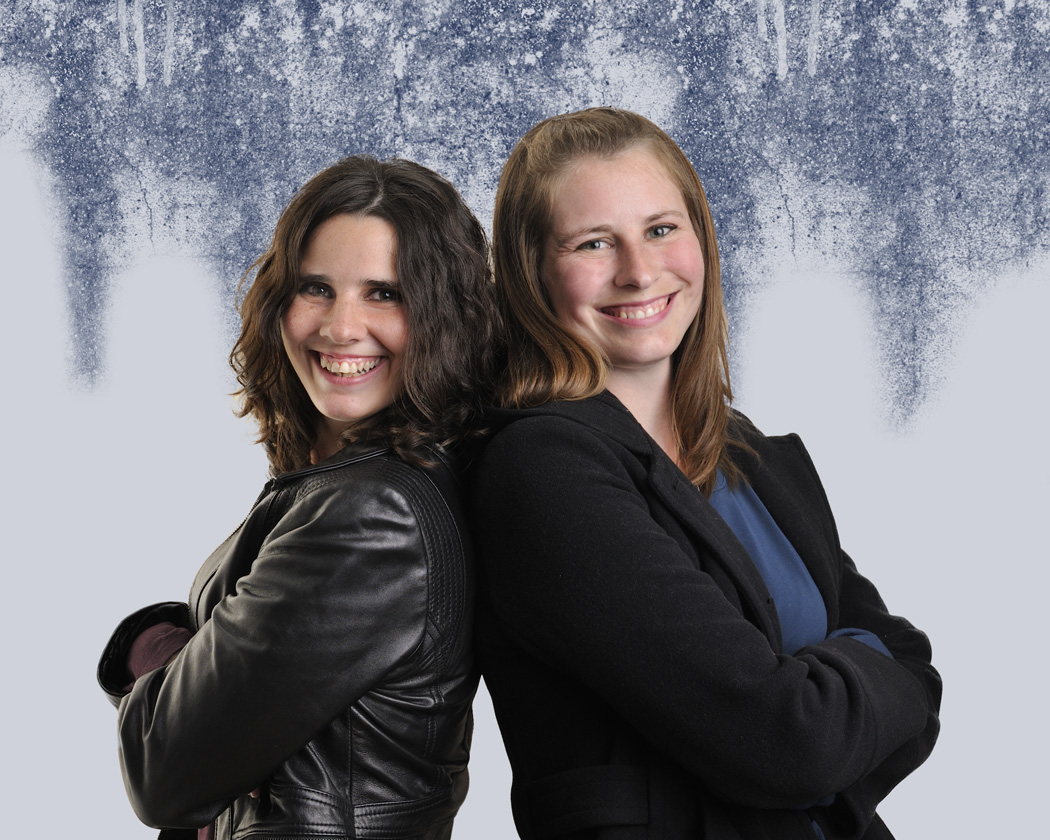 Heidi Lang and Kati Bartkowski are a writing team of two sisters with twenty years of experience in Judo. Heidi likes to fling food across her stove while attempting to cook new dishes, and Kati enjoys trying new cuisine at fancy restaurants. Between the two of them, they love creating characters that kick butt both inside and outside the kitchen.