If I had to choose one word to describe Jacqueline West’s The Collectors, it would be “spellbinding.” From the very first page — scratch that: from the very first sentence — the story gets its hooks in you, and tugs you along until the very end. Yet I found myself fighting that tug almost constantly. Because as much as I wanted to rush along to find out what happened next and make sure the characters I came to care so much about were okay, I wanted to linger, to relish each exquisite sentence, every artfully chosen word, and to prolong my stay in the wonderful, magical world Jacqueline has created. Just like the worlds in all the best fantasies, the world of The Collectors both is and isn’t our own. But a trip to that world does what every great book does — it leaves us more appreciative of, curious about, and tuned into the everyday (yet often unnoticed) magic surrounding us.

It was an honor and a pleasure to get to ask Jacqueline some questions about herself, her new book, her process, and more. Check out the interview below, and then go get your hands on a copy of The Collectors — it is not a book you want to miss.

First off, Jacqueline, thank you for stopping by the MG Book Village to celebrate The Collectors and to chat a bit. Before we get to the new book, would you care to introduce yourself to our readers?

Hi! I’m Jacqueline, and I’m a writer (and reader and parent and former teacher and obsessive cookie-froster). I write everything from poetry and plays for adults to novels for young readers. My middle grade series The Books of Elsewhere began in 2010 and concluded in 2014, and now I’m about to release The Collectors. It’s my first middle grade book in four years, so I’m more than a little excited.

You write both Middle Grade and Young Adult fiction. How early on in your process do you know which category a story idea will fit into? Do you think about it all before or while writing?

I tend not to think about categories until I’m pretty deep into a first draft. (The more I think about what kind of slot a book will fit into, the more I worry that it won’t fit anywhere at all.) Also, I’ve found that the age of my protagonist tends to choose my category for me. An eleven-year-old main character will see and experience the world very differently from an eighteen-year-old – so once I know my main character and understand him/her, that character will determine a lot of the content of the book, whether it’s MG, YA, or something else entirely.

Is there anything about the Middle Grade age range that you especially enjoy or appreciate?

There’s just something about the middle grade age range that means magic. MG readers and MG protagonists live in the borderland between childhood and adolescence, where there are a zillion chances for discovery, a zillion doors to open. They’re able go off on adventures on their own, and make choices on their own, and read entire books on their own; they’re stepping into the real world for the first time, but they’re still able to believe in fantastical, imaginary worlds too. They’re at the age where everything is possible. I’m not saying I’d choose it for myself, but I totally understand why Peter Pan decided to stay twelve years old forever.

Now, let’s get to the new book – The Collectors. Can you tell us a little about it?

The Collectors is about an eleven-year-old boy named Giovanni—although nobody calls him that except for his opera-singing mother. Everybody else calls him Van, if they bother to speak to him at all. Due to his mother’s work, Van has traveled all over the world, never staying in one place for long, never making close friends or becoming part of any groups. Van is also hard-of-hearing. These things have made him an isolated, imaginative, extremely perceptive kid. His favorite hobby is collecting the tiny objects that he finds on the ground in the places that he and his mother visit—things that nobody else even bothers to notice.

One day, when he’s alone in a park in a big city, searching for miniature treasures, Van sees something that he’s not supposed to be able to see… and someone else notices that he’s seen it. And then Van’s life starts to get extremely dangerous.

What compelled you to write a book about wishes and wish-making?

Most of my very favorite stories involve magical, impossible things that happen within the real world. I’m also a bit obsessed with superstitions. (When I started writing The Collectors, I was already at work on a collection of superstition-based poems, so I’d been researching and daydreaming and making notes about them for years.) Superstitions are everyday, real-world magic. They’re a magic so ordinary that it goes unnoticed—which gives them a sneaky kind of power.

I’d guess most people, or at least most grownups, don’t truly believe in magic. But we still worry about seven years of bad luck when we break a mirror. We won’t walk underneath a ladder. We’re excited when we find a four-leaf clover. And wish-making superstitions are some of the most common and most overlooked superstitions of all. I mean, who doesn’t make a wish when they blow out their birthday candles? Who hasn’t made a wish on a star, just in case it might come true?

What we don’t think about is: Who is granting these wishes? What magic forces are at work here? Who decides which wishes will come true? I wanted to chase after these questions and see where they led me. I wanted to write about a real world that is filled with unseen, beautiful, dangerous magic. Because I hope it is.

A big theme of the book is noticing, as well as what you might call the unnoticed – the people, places, creatures, and objects that the majority of people pass over without a second though (or even a first!). Do you consider yourself good at noticing the often unnoticed? Do you have to work at it?

Like a lot of writers, I’m a story scavenger. I’m always looking for shiny little things that spark my imagination: an image, a face, a line of dialogue, an emotional memory. It’s a chicken-and-egg situation—I’m not sure if I’m a writer because I’ve always done this, or if I do this because I’m a writer (but it’s probably the former!). In that sense, I think I’m good at noticing the unnoticed, or the under-noticed. For me, crafting stories is a way of paying close attention, and of remembering things that might otherwise slip away.

But I also know that I overlook amazing things all the time. I have a three-year-old son, and he’s constantly spotting things that are completely invisible to me. Look, there’s a bird! I see a button under that chair. My pear looks like a whale! He sees things that I just don’t see—not until he has pointed them out.

The things we’ve seen a thousand times are easy to overlook. But for a small child, everything is new, so everything is worth paying attention to. I try to remind myself to look at the world more like my kiddo does: to look closely, to pay real attention, not just to see the things that I already expected to see. Because Van, the main character in The Collectors, is a child who is on his own so much, and because he relies so strongly on his vision, he’s able to see the world in this sharpened, heightened way. He sees what other people don’t see.

One thing about the book that I was continually (and delightfully) surprised by was your use of humor. Often in the most unexpected moments, there’s a note of lightness, or even silliness. Can you discuss your use of humor in your writing?

Oh, I’m so glad this came through! Growing up, my very favorite books combined fantasy, fear, and humor. I loved books that could both terrify me and make me laugh—things like the Bunnicula series, and The Hobbit, and pretty much everything by Roald Dahl.

As I write, I try to think about the mood and point of each scene. If there’s a moment that needs to be truly dark and heartbreaking, then it’s not a place for some goofy humor. But if there’s a moment of tension where one of my oddball characters would naturally do or say something funny, it can be like this little glint of light in the darkness. The glint doesn’t erase the darkness, it just gives it greater depth. Funny characters make us love them. And then we’ll fear for them even more.

Plus, there’s just nothing better than that thrilling, telling-stories-around-the-campfire feeling of shivering and laughing at the same time.

What do you hope your readers – in particular the young ones – take away from The Collectors?

I hope The Collectors will remind readers to take a closer look at the world all around them. Magic could be hidden anywhere.

I also hope it will remind readers that our differences—the senses we have or don’t have, the physical qualities we were born with or develop, the gifts we use or lack—give each of us our own completely unique lens with which to experience the world. And that makes the world so much richer.

Many of our site’s readers are teachers of Middle Grade-aged kids. Is there anything you’d like to say to them – in particular those planning to add The Collectors to their classroom libraries?

First, thank you for being a teacher. I think it’s the hardest, best, most vital job in the world (although as a fourth-generation teacher myself, I might be just a teeny bit biased).

I was a lucky kid: I grew up in a house full of books, with access to a friendly local library. But I know that for many kids, school is the only place where they encounter books—and it matters so much that some of those books be ones they read just for pleasure, or that they get to choose for themselves. If you have kids in your classroom who like books that combine fantasy and mystery and adventure, or who like scary stories with some humor mixed in, I’d be honored if you would guide them toward THE COLLECTORS.

I also frequently hear from teachers who use my books as classroom read-alouds, which makes me happier than I can express. If you do that, please get in touch and make my day.

Where can readers find more information about you and your work?

You can find me online at http://www.jacquelinewest.com. I keep a (usually) up-to-date appearance calendar and blog there, along with lots of other info. You can contact me through my website, or reach out via Facebook or Goodreads. And if you’d like to see pictures of my dog (and my books and my writing process), you can follow me on Instagram: jacqueline.west.writes. 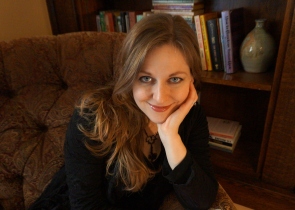 Jacqueline West is the author of the middle grade fantasy The Collectors, the YA novel Dreamers Often Lie, and the NYT-bestselling series The Books of Elsewhere. Her debut, The Shadows (The Books of Elsewhere, Volume One), garnered multiple starred reviews and state award nominations, was named a Publishers Weekly Flying Start, and received the 2010 CYBILS award for fantasy/science fiction. Jacqueline lives amid the bluffs of Red Wing, Minnesota, surrounded by large piles of books and small piles of dog hair.