I’ve been thinking a lot lately about shoes. Not as in, those cute fringed boots I bought this past fall, but as in, can we truly ever walk around in another person’s shoes? Is it actually possible to experience and view a situation through someone else’s eyes? I have to admit, with so much divisiveness and disagreement in our country right now, I fear the answer is no, not really.

And this worries me. Sometimes keeps me up at night. I reason with myself in the dark as I toss and turn: well, if we aren’t able to be in another person’s shoes, feel what they feel, we can at least listen, and try to empathize as best we can, right? But not only have many people stopped listening to each other these days, more importantly, it seems we’ve forgotten how to compromise. And what worries me most is that our kids are witnessing this. What kind of example are we setting?

Several years ago, I got an idea for a middle grade novel that would eventually become Ethan Marcus Stands Up (Simon & Schuster/Aladdin 2017). A super-fidgety boy who’s fed up with sitting in school all day (he gets Sponge Bob butt) attempts to invent a device so kids can stand at their classroom desks. He’s never invented anything, and that’s not his skill set, but he’s determined and perseveres in spite of numerous fails. The idea was initially sparked when I was helping my son review for a science test. He needed to jog around our family room while answering questions because, as he told me, his brain works better when he’s moving. 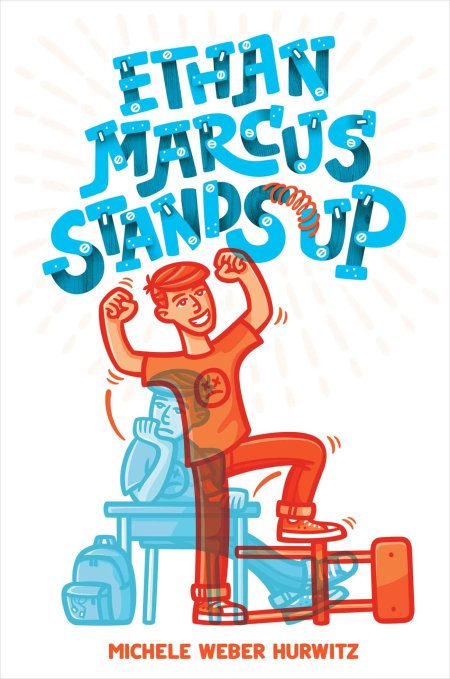 Anyway, I dove right in and started writing. In the first ten or so drafts, I narrated the story solely from the main character Ethan’s point of view. But draft after draft, something was missing, and I couldn’t figure out how to make it right.

I grew frustrated. I tried everything I could think of to fix the story, and almost abandoned the project. But one day, while procrastinating on social media, I got caught up in reading people’s argumentative back and forth comments on a particularly volatile post. It struck me how strongly, how vehemently, each person had interpreted the exact same situation in a completely different way. And sadly, no one was even attempting to understand anyone else. Their way, their opinion, was the way it was. I felt utterly disheartened. This is what we’ve become. Everyone firmly in their own shoes.

But then I remembered one of my favorite passages from To Kill A Mockingbird. It’s when Atticus says to Scout:

“If you can learn a simple trick, Scout, you’ll get along a lot better with all kinds of folks. You never really understand a person until you consider things from his point of view, until you climb inside of his skin and walk around in it.”

Talk about words of wisdom. That sat with me for a while, and then – lightning bolt. Not to make the leap from To Kill A Mockingbird to my measly little middle grade novel draft, but I suddenly knew what was missing. Shoes. Skin. Ethan shouldn’t tell the whole story, because he can’t. Each character needed to interpret situations from their own lens, and I realized I wanted this to be a pivotal theme of the story.

I put aside every previous draft and started fresh, writing the novel with five alternating points of view, sometimes with several or even all of them in one chapter. I drew from the back and forth commentary on social media posts (without the nastiness), having each character give his or her take on the same events and experiences.

In the first chapter, Ethan stands up during language arts and protests the agonizing constant sitting because, “It felt like if I didn’t get up that very second, I was going to explode. I thought about trying to explain (to Mr. Delman but) I knew my reasons wouldn’t matter to him. Stuff like that doesn’t matter to a row kind of guy.”

Ethan’s sister Erin (in the same class) has a completely different analysis “My brother’s gone insane. That’s the only explanation I can come up with. Out of nowhere, Ethan stood up and started arguing with Mr. Delman, saying something about a protest. I almost dropped my mechanical pencil. Let me clarify here that Ethan got a C-minus in social studies last year. I’m willing to bet that he never read the chapter on the famous demonstrations in history, so how could he even know what a protest is?”

Their friends Brian and Zoe have different takes on the experience, too. Through the book, one of the most interesting aspects is how everyone assumes mysterious Wesley is a bully. Rumors abound about his past, he looks mean and gives off a menacing vibe, but that couldn’t be further from the truth. He has secrets. All the kids do. But they see what they think they see in each other, and make judgements based on that.

I knew I wanted to illustrate that part of each character’s journey would be to realize, understand, and finally, appreciate that not everyone draws the same conclusions, even if they were in the same place together, watching the exact same scene unfold.

I carried this theme further in the sequel, Ethan Marcus Makes His Mark, released last month (Simon & Schuster/Aladdin). I added narration from Marlon, a genius and also on the spectrum. His literal, black and white observations are simply how he makes sense of the world around him, but they are misinterpreted by Erin, and she fumes every time he’s near. He told her that boys are better than girls at science because at the previous year’s school invention day, three boys won. He was referring to one instance, but she took it as a blanket statement. Marlon and Erin. Those dang shoes again.

Throughout the first, and more completely the second book, both Ethan and Erin, as well as the other characters, learn to accept each other’s opposing outlooks and thrive because of them, eventually realizing they have way more similarities than differences. At the end of the second book, that’s what helps the kids finally succeed at making their invention.

I couldn’t help but include some shoe references in both books. Erin wears her mom’s too-big heels to an invention camp, believing she’ll look more professional, but then she trips and falls, smashing into Marlon and creating a huge, embarrassing scene. Another character, Connor, has a giant hole in the toe of his sneaker, which Erin is initially annoyed by, but Connor’s the one who calmly gathers the group and mediates their disagreements.

In this season of giving, my wish is that we all learn to better understand and appreciate each other’s different viewpoints. It may be difficult to truly experience the world from another person’s shoes, but that doesn’t mean we can’t keep trying. I have a new pair of cute, fringed boots if anyone would like to give it a try. Michele Weber Hurwitz is the author of Calli Be Gold, The Summer I Saved the World…in 65 Days (both Penguin Random House/Wendy Lamb Books), Ethan Marcus Stands Up, and Ethan Marcus Makes His Mark (both Simon & Schuster/Aladdin). Find her on Twitter @MicheleWHurwitz, and on Instagram @micheleweberhurwitz. Her website is micheleweberhurwitz.com. She lives in the Chicago area with her husband and three children. Ice cream is always welcome.