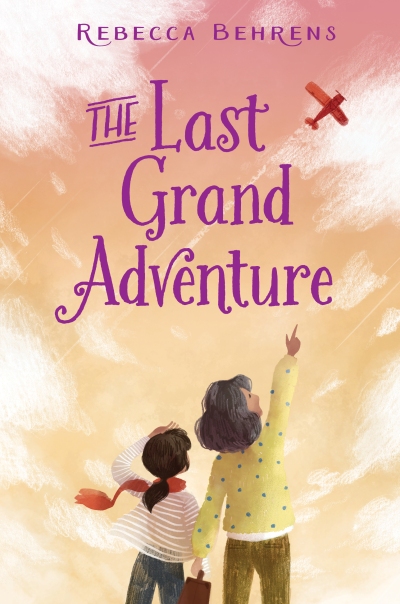 THE LAST GRAND ADVENTURE, Rebecca Behrens’s new novel, hit shelves yesterday! Today, Rebecca’s here at the #MGBookVillage to celebrate the book’s release and answer some questions. Check out the interview below, in which I ask Rebecca about the new book, her interest in Amelia Earhart, her love of history, her feelings about flying, and more!

First of all, can you tell us a bit about your new book, THE LAST GRAND ADVENTURE?

Sure! Set during the summer of 1967, it’s about twelve-year-old Bea, who winds up on the adventure of a lifetime with her grandmother, who is searching for her long-lost sister, Amelia Earhart. Bea and Pidge are convinced that if they can make it from Los Angeles all the way to Atchison, Kansas—Amelia’s birthplace—the sisters will finally be reunited. But their secret, planes-trains-and-automobiles trip has plenty of surprises along the way . . .

What is it about Amelia Earhart and/or her life that drew you to write a book in which her story plays an important part?

I’ve always been fascinated by the mystery surrounding Amelia Earhart’s famous last flight. Every time a new clue is uncovered or a new analysis of the evidence is announced, I hope that we’ll finally know what happened to her and Fred Noonan on their way to Howland Island . . . but until some evidence is found that definitively proves their fate, only fiction can try to answer the question.

So it was the mystery that inspired me to write a book that incorporates her story, but while researching her life, I remembered what an incredible figure she is aside from her disappearance. Amelia was smart, daring, and a charismatic publicity whiz. She racked up all kinds of firsts and accomplishments and surely inspired a lot of women to fly, or to pursue education and careers in STEM fields that they might not have done otherwise—her advice to women was to “dare to live.”

Amelia Earhart has been in the news a lot these past couple weeks. Care to comment on the continuing mystery of her disappearance? Do you think it’s been solved?

It’s been an exciting couple of weeks for Earhart enthusiasts! I think the new forensic analysis of the old evidence—bones that were found on Nikumaroro in the 1940s—is compelling. (In short, a researcher reevaluated the old records and photos and has concluded it’s very likely that those previously examined remains belonged to Earhart. Unfortunately, the actual bones were destroyed decades ago and can’t be analyzed firsthand.) Personally, unless some kind of undeniable evidence is identified, like a piece of her plane with the serial number or DNA evidence, I don’t think we can declare the mystery “solved.” But I’m inclined to believe this new study is on to something. And I hope it means she wasn’t eaten by giant coconut crabs, which is an actual theory.

All of your books, in one way or another, incorporate history. Have you always been interested history?

I have! I credit my parents—both history buffs—who loaded my sister and I into the station wagon for road trips when we were kids. We stopped at every historical site or marker along the way, and that was a great way to learn about new events and people and places. I’m also grateful for my fifth-grade teacher, Mrs. Gerlach, who really encouraged my enthusiasm for social studies. She did a wonderful job of finding historical fiction for me to read, so I could keep learning and thinking about what we’d studied in class.

Why do you think it’s important to teach kids about history, and how is fiction uniquely able to do this?

Knowing the past helps us understand the present, and historical fiction makes history “real” by adding feelings to the facts. That helps readers create not just informational but emotional connections to what they’re learning. Fiction kindles awareness and empathy, which are so important to encourage in a world that is very often divided.

What are some of the challenges of incorporating real people in your fiction? How do you make sure you get it “right”?

When writing about Amelia Earhart, I felt pressure to somehow explain her disappearance. Author Caroline Starr Rose once shared with me a really important idea about writing historical fiction—that history can be hazy, but stories can’t. So I always try to, at least in the world of my story, have a clear idea of what I think happened, even when the historical record is uncertain. (That doesn’t mean I won’t write an ambiguous ending, though . . .)

In The Last Grand Adventure, both Meelie and her sister, Pidge, are fictional characters based on two real, fascinating women. It’s tricky to write about real people—which I’ve done in all three of my books so far. I think an author’s note is essential because it’s a space in which the author can point out the liberties taken with the historical record and remind readers that even though the story is sprinkled with facts throughout, it’s still fiction.

What are some of your favorite history books, fiction or non-fiction?

I love Candace Fleming’s Amelia Lost and the Who Was? series of MG biographical and historical nonfiction (I should disclose that I’ve worked on that series in my other job as a copy editor—but I’d be a fan regardless). For MG historical fiction, some favorites are Laurie Halse Anderson’s Fever 1793, Lois Sepahban’s Paper Wishes, Rita Williams Garcia’s One Crazy Summer, and the Birchbark House series by Louise Erdrich. I also love Jennifer Holmes’s historical fiction—she does a wonderful job of incorporating humor with her history.

Would you ever attempt to circumnavigate the globe in a Lockheed Model 10 Electra?

Definitely not! I can be a bit of a nervous flyer, and that’s in planes that have all the comforts like upholstered seats, in-flight entertainment, a snack cart, and a bathroom! 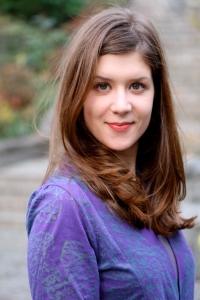 Rebecca Behrens grew up in Wisconsin, studied in Chicago, and now lives in New York City. A former textbook editor, Rebecca loves writing and reading about kids full of moxie and places full of history. She is the author of the middle-grade novels When Audrey Met Alice, which BookPage called “a terrific work of blended realistic and historical fiction”; Summer of Lost and Found, which Kirkus praised as “a good find indeed”; and The Last Grand Adventure, which School Library Journal called “a heartfelt tale of discovery and hope.” Visit her online at www.rebeccabehrens.com.

One thought on “Interview: Rebecca Behrens”