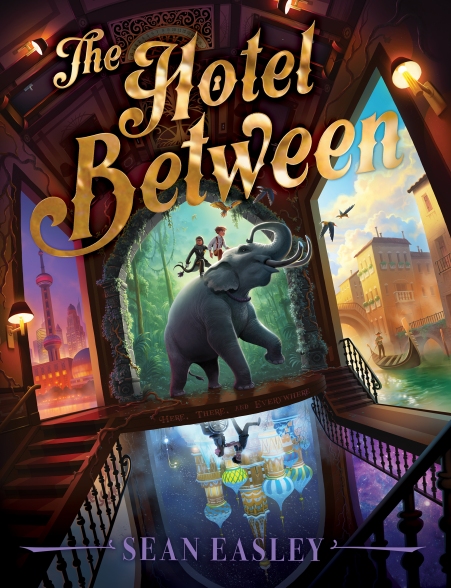 Okay, so we all know we’re not supposed to judge a book by its cover. But have you seen the absolutely glorious cover of the Middle Grade at Heart November book club pick, The Hotel Between? Isn’t it stunning and intriguing?

The cover artist, Petur Antonsson, did an incredible job with the illustration, and the author, Sean Easley, gave Antonsson a whole lot to work with because this book features some truly masterful visual descriptions. Let’s take a look at a few passages to see how Sean Easley manages to evoke rich, specific images while also leaving just enough to the reader’s imagination and conveying a sense of his narrator’s personality.

First, here’s how the book’s narrator, Cam, describes the fantastic and mysterious Hotel the first time he sees it:

I turn back to the door and catch a glimpse of…something unbelievable. Thick, velvety maroon carpet stretches deep into an open foyer and up a twisty staircase. Warm light shines from old, Thomas Edison-style bulbs in intricate brass fixtures. A sparkly chandelier with long, dangly chains of crystals casts rainbows everywhere, flooding the enormous space with warm, smoky light. I can’t even see the ceiling, it’s so high. And I think I smell blueberries.

There are so many vivid sensory details in this opening description. We get a sense of the vastness of this place, how old it seems, and how it’s too big and too complex for Cam to fully take in. There’s a sense of oddness, too, and a bit of unexpected humor with the ending sentence about blueberries. There are interesting verbs (stretches, casts, flooding), and we can see from the word choice and specificity that Cam is intelligent and perceptive, despite how self-deprecating he can often be.

The description also doesn’t go on too long; pretty soon, the door to the hotel closes and the action starts back up. Easley doesn’t take up so much space with his lush descriptions that the action drags. He leaves us wanting more and imagining what else Cam doesn’t see in his first glimpse of this intriguing place.

Soon, Cam visits lots of international locations through the Hotel’s magic, and the descriptions of these places are just as striking as the description of the Hotel itself. Here’s how Cam describes the scene he takes in when he walks out the “Budapest Door” into the city of Budapest:

All around us, tall glass-and-stone buildings drip with light. Carved granite arches glow as the sun sets beyond them. Warm, yellow strings of incandescent bulbs drape from the pop-up tents scattered throughout the square. Tree branches twist and curl, carrying the lights into the sky like the fiery breath of a dragon.

Again, check out all those striking verbs (drape, twist, curl, carrying) and the way we get plenty of vivid details but not too many; we have space to imagine what else is going on in this scene and to feel its glowing warmth. The use of figurative language is also terrific. That simile about the “fiery breath of a dragon” is not only original and interesting, but it also reveals something about Cam, who is a very cautious character and sees this world he’s stepping into as something amazing…but also frightening.

And it’s not only places that Sean Easley describes effectively; he also has a knack for describing characters’ appearances. Here’s a passage from when Cam first meets a mysterious man named Agapios:

And at the desk in the center of the room sits a man who looks like Death on his way to the prom—flat, angular forehead with a receding hairline and slick black hair. His face is long—way longer than it should be—and his cheekbones look like someone surgically inserted dice into his face.

Isn’t that an outstanding paragraph? The simile about “Death on his way to the prom” reveals Cam’s sense of humor as well as his lingering fear. Plus, it leaves the reader space to imagine what this man is wearing and what might make his features look “deathly.” The humorous (but disturbing) line about dice being inserted into Agapios’s face also paints quite a visceral picture! Based on the way Agapios is described, the reader immediately wants to know more about who he is and what he’s up to.

Let us know on Twitter if there are other descriptions in the book that strike you as especially effective, and we hope you’ll enjoy our newsletter about The Hotel Between, which will go out on November 26th. And don’t mis our Twitter book club chat about the book, which will take place at 8pm EST on Tuesday, December 4th with the tag #mgbookclub!